Origin of the Title

The phrase “Proudly Serving My Corporate Masters” was one I remembered from my early days at Microsoft (I started working there in March of 1990). As the book was nearing publication, I decided to track down exactly where it came from.

A co-worker named Bryan, who has been there 15+ years, had a vague memory that the slogan had been on a button or possibly a t-shirt, duplicated and distributed in the late 1980s by some employees as a way of tweaking Microsoft management for being too overbearing in some way.

The phrase certainly exists in the collective subconscious of the American workforce; it appears on various slogan and bumper sticker lists floating around the Internet, and I have seen it used in a Usenet signature. In fact, a company called Northern Sun Merchandising sells a button with the phrase on it. However, as we shall see below, it was not the one handed out at Microsoft, and I was looking for specific information about that one.

With a few email exchanges, I was able to track down most of the specifics. Despite the fact that this happened over ten years ago, most of the principals still work at Microsoft (last names have been removed to protect both the innocent and the guilty).

The button first enters the Microsoft universe as explained in this mail:

Way back when I first interned here, I spent a lot of weekend time in Seattle. There was - and still is - a small bookstore on 1st Ave near Pike Market called "Left Bank Books." It's an entertaining place to browse titles. Anyway, sometime between the summers of 1986 and 1987, a savvy street vendor set up shop right in front of the place, displaying buttons with slogans that would appeal to customers of that particular bookshop. One of the buttons - a small blue button with white letters - caught my eye. I bought two of them: one for me and one for a friend who I knew would appreciate the humor (i.e., David). I may still have mine somewhere.

Reproduction and distribution of the button beyond that happened after I returned to school so I actually know nothing of that. If the original button vendor ever found out about it though, I hope he was able to savor the layers of irony.

David describes what happened next:

Jeff gave me the button, probably in the summer of 1987, when he was an intern in the Xenix group. Karl saw, liked, and duplicated the button in massive quantities for distribution at a company meeting, perhaps 1987, perhaps 1988. SteveB wore one when he gave his speech. I don't think that the printing of the button was tied to any particular event, just simple playfulness.

If I remember correctly, the idea for mass duplication came from the chastising David you received from Ballmer about the infamous Calendar Reform email. And since it was the company's 10-year anniversary, we decided to get them made up. I vaguely recollect that it was Terry who actually had them made, I believe that I simply contributed funds and strong urging.

However at this point things get fuzzy, both on who did the distribution, and the year it was done. Regarding the perpetrator, Terry replies:

I was not involved in this particular effort...

I will use this opportunity to mention that about three times a year, I get an e-mail chain where the collective conscience of the corporation remembers me as the source of every memorable prank, when in actuality I was responsible for much less than half of them.

and Karl replies back:

The date is now also up for grabs, since Jeff says:

Wouldn't the 10-year anniversary have been in 1985 (given as we just had the 25)? That would have been before my first internship (and incidentally, before the move to the current campus).

More potential timing matters: I was only at one company meeting (1986) and the buttons were not distributed there.

at which point David chimes in with:

Yeah, I'd trust Jeff's recollection over Karl's on this one.

So it appears that most likely story is that the buttons were found by Jeff, given to David, and duplicated by Karl. I was ready to accept that they were handed out at the company meeting in 1987, but I recently got this email from a former employee:

I was at the company meeting with the corporate master button and my first co meeting was 88. I would have guessed the button year was 88 or 89, so by consensus it must have been 88.

So the final verdict is that they were distributed in 1988.

Manny also contributed a photo of his button, which he had amazingly saved all these years: 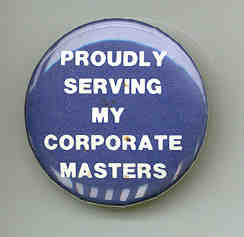 I thought that was the end of the story, but then I received the following email:

David's comment [see above, September 28 at 4:02 PM] is largely an accurate description of what happened:

What's that you say...a book for some buttons? Well, the deal was done and on May 21, 2001, I became the proud owner of two authentic, original buttons. Here is a still life I composed with a copy of the book, a button, a ruler, and my hand. The button is 1 1/4 inches in diameter: 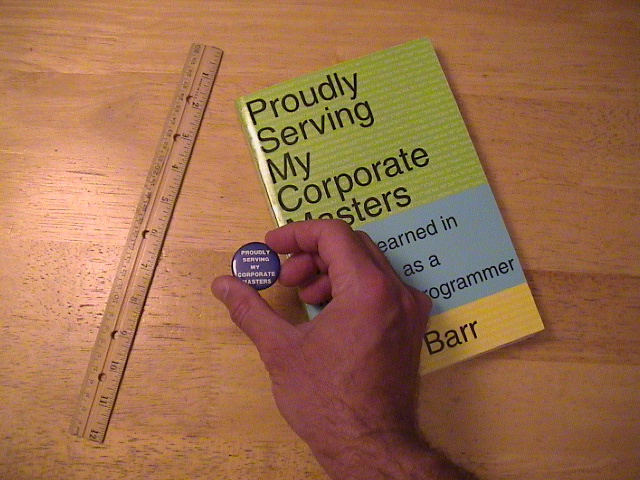 Danny also unearthed a few pieces of mail from the archives. Here is some from way back in 1988, urging action on Project Button (these are the same Karl, Danny, and David as in the emails above):

We need to organize this now.

and then an update after the meeting:

As those of you who were at the Company Meeting are aware, the buttons were a big hit. We distributed almost all of the 500 buttons without difficulty, and we even had SteveB wearing one while he gave his talk!

Actually that was pretty quick work. Danny's memory was that the meeting was on Friday (the 23rd) so the whole thing was organized in less than a week. Also amazing is that 500 buttons was enough to cover everyone at a company-wide meeting of Microsoft.

If any Microsoft employee reading this has any other stories about these buttons, please let me know!

Back to main page.